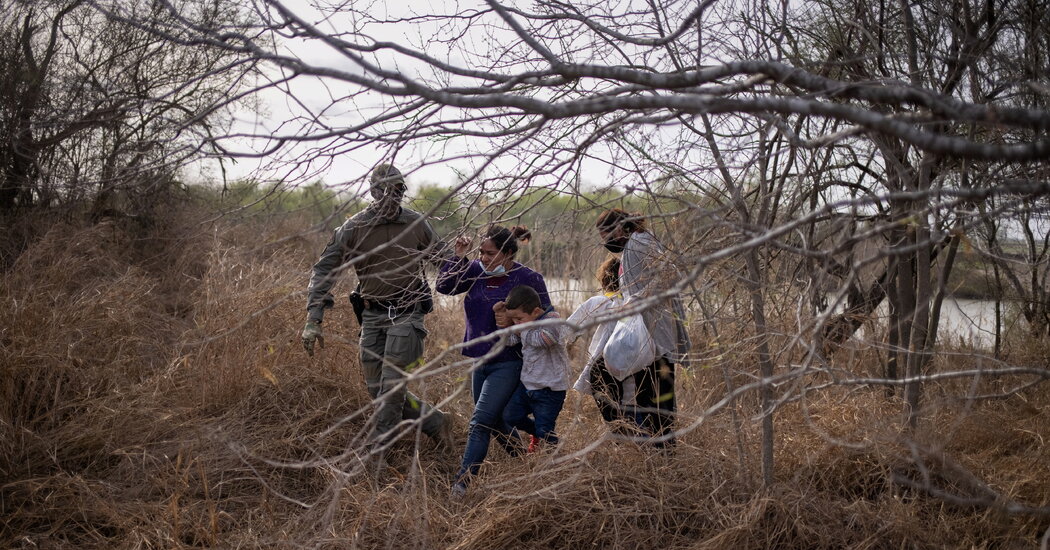 MEXICO CITY — The Biden administration has been quietly pressing Mexico to curb the stream of migrants coming to the United States, urging it to take in more families being expelled by American authorities and to step up enforcement at its southern border with Guatemala, according to Mexican officials and others briefed on the discussions.

President Biden has moved quickly to dismantle some of former President Trump’s signature immigration policies, halting construction of a border wall, stopping the swift expulsion of children at the border and proposing a pathway to citizenship for millions of immigrants in the United States.

But he is clinging to a central element of Mr. Trump’s agenda: relying on Mexico to restrain a wave of people making their way to the United States.

Anticipating a surge of migrants and the most apprehensions by American agents at the border in two decades, Mr. Biden asked President Andrés Manuel López Obrador of Mexico in a video call this month whether more could be done to help solve the problem, according to Mexican officials and another person briefed on the conversation.

The two presidents also discussed the possibility of the United States sending Mexico some of its surplus vaccine supply, a senior Mexican official said. Mexico has publicly asked the Biden administration to send it doses of the AstraZeneca vaccine, which has not been approved for use in the United States.

Mexican officials contend that the efforts to secure vaccines are separate from the negotiations over migration. But they acknowledge that relations between the United States and Mexico, which has suffered one of the world’s deadliest coronavirus epidemics, would be buoyed by a shipment of doses south.

“Both governments cooperate on the basis of an orderly, safe and regular migration system,” Roberto Velasco, director general for the North America region at Mexico’s foreign ministry, said in a statement, referring to the engagement between the two countries on migration and vaccines.

But he said there was no quid pro quo for vaccines: “These are two separate issues, as we look for a more humane migratory system and enhanced cooperation against COVID-19, for the benefit of our two countries and the region.”

A Biden administration official declined to comment on discussions with Mexico, but noted that both countries shared a common goal of reducing migration by addressing its root causes, and said they were working closely to stem the flow of people streaming to the border.

On the question of vaccines, a White House official said the United States was assessing how to provide doses of the AstraZeneca vaccine to Mexico and Canada.

Mexico has agreed to increase its presence on its southern border with Guatemala to deter migration from Central America, one of the government officials said, and local Mexican officials say their country has recently stepped up efforts to stop migrants on the northern border with the United States as well.

But there are also signs that Mexico’s commitment to policing migration — a central demand of Mr. Trump, who wielded the threat of tariffs against all Mexican goods unless migration was curbed — may have flagged in the waning months of the Trump administration.

From October through December of last year, the number of Central Americans apprehended by Mexico declined, while detentions by American agents increased, according to Mexican government numbers and data compiled by The Washington Office on Latin America, a research organization that advocates for human rights.

“The likelihood of the outgoing Trump administration threatening tariffs again was low, so there was an incentive for Mexico to go back to its default state of low apprehensions,” said Adam Isacson, an expert on border security at The Washington Office on Latin America.

The Biden administration’s appeal to do more against migration has put Mexico in a difficult position. While Mr. Trump strong-armed Mexico into militarizing the border, some Mexican officials argue that his harsh policies may have at times helped lessen their load by deterring migrants from attempting to make the journey north.

Mr. Biden is less likely to resort to threats of tariffs to get his way, officials and analyst say. But now Mexico is being asked to hold the line against a surge of migrants — while the Biden administration is signaling that the United States is more welcoming to migrants.

“They get to look like the good guys and the Mexicans look like the bad guys,” said Cris Ramón, an immigration consultant based in Washington, D.C.

“All the positive humanitarian policies are being done by the Biden administration.” Mr. Ramón added, “and then the Mexicans are left with the dirty work.”

Mr. López Obrador is also trying to find a way of increasing capacity to house migrants in shelters, which are bursting at the seams. In a Tuesday statement, the secretary for homeland security, Alejandro Mayorkas, said he was “working with Mexico to increase its capacity to receive expelled families.”

A Mexican law that went into effect in January prohibits the authorities from holding migrant families and children in detention centers, and the lack of space in shelters has become a major problem.

“Shelters are at a near collapse,” said Enrique Valenzuela, a lead coordinator for the government of Chihuahua state’s migration efforts.

Local officials in Chihuahua and shelter operators say that coordination has broken down between Mexican and American authorities. During the last years of the Trump administration, American officials would notify their Mexican counterparts before expelling migrants across the border and would orchestrate the crossings at a handful of well-staffed border checkpoints, they say.

Under the Biden administration, they say, Customs and Border Patrol agents now deposit migrants at some of the most obscure, understaffed checkpoints, leaving their Mexican counterparts scrambling when they discover dozens of migrants walking in from the United States.

Local government officials in Ciudad Juárez and shelter operators say Mexico is dialing up operations to capture and deport migrants along the northern border. On a near daily basis, two of them said, Mexican authorities are stopping vans stuffed with families and pickup trucks carrying livestock — along with migrants crouching on the floor to avoid detection.

Part of the reason Mexico is willing to continue cracking down is that, despite being a country that has long sent people north, there is a lot of resentment toward Central American migrants.

“The level of negative attitudes that we have toward migrant flows has gone up, so there won’t be a political cost” for Mr. López Obrador, said Tonatiuh Guillén, who ran Mexico’s National Migration Institute in the first half of 2019. “But with Trump, we negotiated nothing — we gave them a lot and they didn’t give us anything back,” he added, arguing that the strategy should be different with Mr. Biden.

Despite the very public tensions with Mexico under Mr. Trump, Mr. López Obrador has been wary of the Biden administration, concerned that it might be more willing to interfere on domestic issues like labor rights or the environment.

Instead, several Mexican officials say, his government has pushed the United States to deter Central Americans from migrating by sending humanitarian aid to Honduras and Guatemala in the wake of two hurricanes that devastated those countries and, many experts believe, pushed even more people to migrate.

Mexican officials have also asked the United States to send more Hondurans and Guatemalans apprehended in the United States directly to their home countries, rather than releasing them to Mexico, making it even harder for them to try to cross the border again.

While the negotiations over migration may be on a separate track from Mexico’s request for surplus vaccines from the United States, the need for them in Mexico is clear.

About 200,000 people have died in Mexico from the virus — the third highest death toll in the world — and the country has been relatively slow to vaccinate its population. That poses a potential political risk for Mr. López Obrador, whose party is heading into crucial elections in June that will determine whether the president hangs onto control of the legislature.

“Mexico needs cooperation from the U.S. in getting its economy jump-started and getting vaccines to get out of the health crisis,” said Andrew Selee, president of the Migration Policy Institute in Washington. “So there’s room for the two countries to reach agreements based on aligned interests rather than overt threats.”