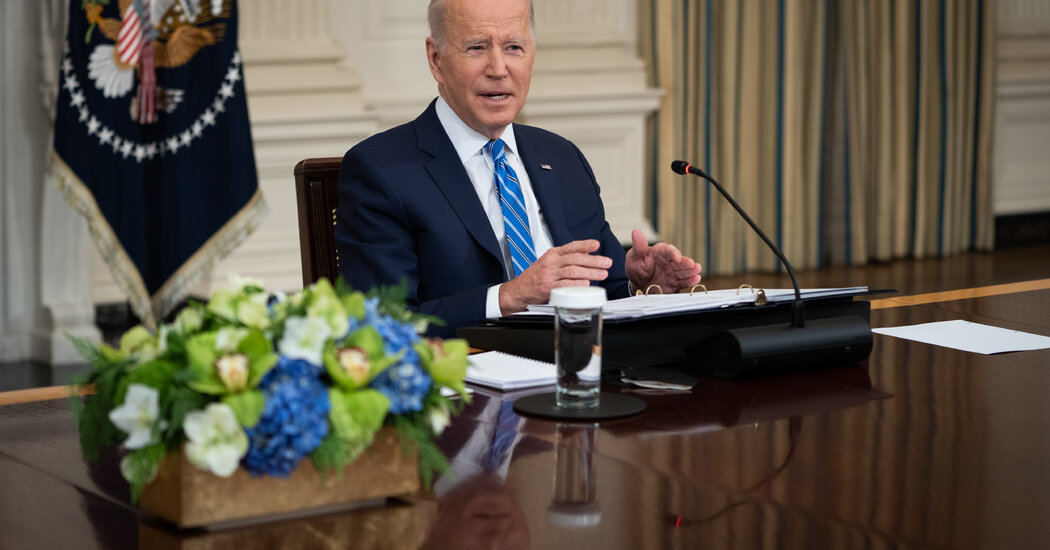 WASHINGTON — President Biden said on Thursday that he would name a successor for Justice Stephen G. Breyer by the end of February, calling the retiring jurist “a model public servant in a time of great division” and pledging to take what he called the overdue step of putting a Black woman on the court for the first time in its 232-year history.

Justice Breyer, who served as an associate justice on the Supreme Court for nearly 28 years, formally announced his retirement in a letter to Mr. Biden that was delivered Thursday morning. He called it “a great honor” to have participated in “the effort to maintain our Constitution and the rule of law.”

Justice Breyer plans to stay on the court through the end of the current term this summer, and he said he would not leave until a successor had been confirmed by the Senate. His departure will give Mr. Biden his first opportunity as president to put an imprint on the court’s direction, setting off a monthslong confirmation battle in Congress.

The president used the ceremonial moment to lament how politically polarized the country had become and to hint at the partisan rancor that he expects to erupt no matter who he chooses to replace Justice Breyer. He recalled a time in the 1970s when the justice, then a Democratic lawyer on Capitol Hill, would regularly meet with his Republican counterparts.

“In those days, we tried do things together,” the president said.

As if on cue, lawmakers and activists quickly moved into their corners. While most senators issued statements pledging to keep an open mind, some Republicans signaled that they were likely to oppose what they predicted could be a “radical” choice by the president.

Senator Mitch McConnell of Kentucky, the Republican leader, warned Mr. Biden not to “outsource this important decision to the radical left.” Senator Tom Cotton, Republican of Arkansas, urged the president to pick someone “committed to the Constitution and the rule of law, instead of nominating yet another unqualified, left-wing ideologue.”

Liberal groups, meanwhile, have made no secret of their demands for a progressive justice. Speaking from the Roosevelt Room with Justice Breyer by his side, Mr. Biden said he had not yet decided who he would nominate to sit on the court. But he promised a “rigorous” process in which he would consult with senators, outside lawyers, scholars and Vice President Kamala Harris, a former California attorney general and a former member of the Senate Judiciary Committee.

“I will listen carefully to all the advice I’m given, he said.

Senator Chuck Schumer, Democrat of New York and the majority leader, said he would move the process along once Mr. Biden settled on someone, promising to “have a fair process that moves quickly.”

Speculation has already centered on the three Black jurists who are seen as the most likely candidates. They are Ketanji Brown Jackson, a 51-year-old judge on the U.S. Court of Appeals for the District of Columbia Circuit; Leondra R. Kruger, a 45-year-old justice on the California Supreme Court; and J. Michelle Childs, 55, a Federal District Court judge in South Carolina whom Mr. Biden recently nominated for a judgeship on a federal appeals court.

The president is not required to elevate someone who is already a judge, though that is by far the most common route to the Supreme Court. Some of Mr. Biden’s predecessors have nominated politicians, lawyers or law professors.

As he contemplates who he wants to pick, Mr. Biden said he would honor the promise he made as a presidential candidate in 2020. Fighting for the Democratic nomination, he pledged to be the first president to select a Black woman for a life appointment to the court.

“I’ve made no decision except one,” Mr. Biden said on Thursday. “The person I will nominate will be someone of extraordinary qualifications, character, experience and integrity. And that person will be the first Black woman ever nominated to the United States Supreme Court.”

White House officials declined to elaborate on how Mr. Biden would conduct his search for a new justice. Jen Psaki, the White House press secretary, said that Ron Klain, the White House chief of staff and a veteran of many Supreme Court nominations, would be heavily involved along with other senior advisers.

Making a lifetime appointment to the Supreme Court is an opportunity that every president covets. It is one of the few truly lasting marks that the occupant of the Oval Office can leave, with implications for policy and law that can stretch for decades.

In Mr. Biden’s case, replacing Justice Breyer, a liberal on the court, with another liberal jurist is unlikely to immediately affect the ideological leaning of a nine-member court which already has six conservative justices. But Mr. Biden’s pick could remain in her role for decades, with the power to influence future courts that may look very different than the current one.

In praising Justice Breyer, Mr. Biden gave a hint about what he was looking for.

“He’s written landmark opinions on topics from reproductive rights to health care, voting rights, patent law, laws protecting our environment and the laws that protect our religious practices,” Mr. Biden said. “His opinions are practical, sensible and nuanced. They reflect his belief that the a job of a judge is not to lay down a rule, but to get it right. To get it right.”

Over the last several decades, however, the process of nominating and confirming a Supreme Court justice has become an intensely partisan exercise, often leaving the nominees, as well as political combatants on both sides, dissatisfied with the bruising process, if not the end result.

David Axelrod, who served as a top aide to former President Barack Obama, predicted on Twitter on Thursday that Mr. Biden’s nominee would not win confirmation via a lopsided vote like her predecessors, regardless of her “character and qualifications.”“We’re looking at a near party-line vote,” Mr. Axelrod said. “Already baked. Sad reflection on the nature of our times.”

Inside the court itself, Justice Breyer’s departure produced only warm statements from his colleagues praising his tenure in one of the most elite clubs in the world.

Chief Justice John G. Roberts Jr. called him a “tireless and powerful advocate for the rule of law” and noted that his “fanciful hypotheticals during oral argument have befuddled counsel and colleagues alike.”

The Chief Justice also called Justice Breyer a “dear friend” and a “reliable antidote to dead airtime at our lunches, moving seamlessly from modern architecture to French cinema, to old radio shows, to a surprisingly comprehensive collection of riddles and knock-knock jokes.”

Justice Clarence Thomas called it an “absolute joy” to have worked with Justice Breyer and thanked him and his wife, Joanna, “for being such delightful and dear friends whom we love.” Justice Samuel A. Alito Jr. called him “a delightful colleague — brilliant, erudite, friendly, good-natured and funny.”

In his retirement letter, Justice Breyer wrote that he appreciated the privilege of serving on the court for almost 28 years, saying, “I have found the work challenging and meaningful. My relations with each of my colleagues have been warm and friendly.”

In brief remarks after the president spoke on Thursday, Justice Breyer recalled what he often told students who asked about his job. He said he marveled at the diversity of opinions that came before the court and how the American “experiment” managed to survive and thrive.

“It’s every race, it’s every religion and it’s every point of view possible,” he said, attributing that quotation to his mother. “It’s a kind of miracle. People that are so different in what they think, and yet they’ve decided to help solve their major differences under law.”