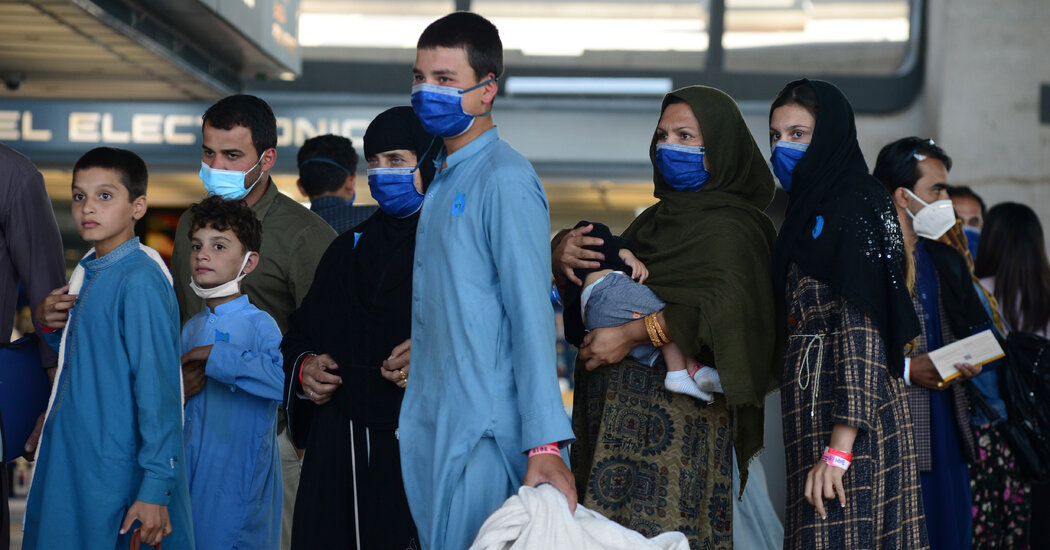 WASHINGTON — The Biden administration is allowing Afghans who have been residing in the United States to remain in the country legally for at least another 18 months, an attempt to provide them more stability as gaining permanent residency could take years.

The benefit, known as temporary protected status, will be extended to more than 74,000 Afghans who were living in the United States as of March 15, according to the Department of Homeland Security, which makes such designations. Most immediately, it will affect roughly 2,000 Afghans who were not among those evacuated during the tumultuous U.S. military pullout from their country last year. Each applicant has to pass a background check.

The program does not provide a path to a green card or citizenship, which many advocates say is warranted for Afghans who were brought to the country after risking their lives to assist American forces. Many served as combat interpreters, as drivers and in other supportive roles over the two decades that U.S. troops fought in their country.

Most Afghans who were evacuated to the United States last year have already been granted another status, known as humanitarian parole, which allows them to stay for two years. But many have had trouble navigating an immigration system that U.S. officials concede was unprepared to help them. The process to reapply for humanitarian parole after two years can be cumbersome for applicants, but temporary protected status is frequently extended for designated countries by the Department of Homeland Security.

Wednesday’s designation appears to be an acknowledgment that it will take years for Afghan evacuees to gain permanent residency through the clogged U.S. immigration system.

“Our nation’s moral obligation to our Afghan allies and friends demands the stability that only a pathway to permanent residence can provide,” Krish O’Mara Vignarajah, the president of the Lutheran Immigration and Refugee Service, said on Wednesday.

Advocates have lobbied Congress to pass a law, the Afghan Adjustment Act, which would offer Afghans in the United States a fast-track path to permanent residency and citizenship. Some have expressed concern that a temporary status designation, like the one issued on Wednesday, would hurt the chances of the legislation passing.

“We are worried that this designation announcement will be conflated with an Afghan Adjustment Act, and people will feel like that is no longer needed,” said Naomi Steinberg, the vice president for policy and advocacy at HIAS, a nonprofit organization that has been helping Afghans resettle in the United States.

Among those already in the country, the Homeland Security Department has estimated that about 40 percent will qualify for special immigrant visas because of their work for the United States in Afghanistan. Such visas would enable them to eventually receive a green card and citizenship. However, the abrupt arrival of large numbers of evacuees has created processing backlogs.

The temporary status is intended for people from countries that have suffered through natural disasters or other urgent situations, allowing them to live and work in the United States for a specific period, which is often extended.

The designation announced on Wednesday does not address the fate of tens of thousands of Afghans — including human rights activists and professional women — who remain in their home country or in neighboring countries, fearing retaliation from a Taliban government that has been searching for people who promoted democratic values or assisted the American military mission.

The Biden administration has faced a barrage of criticism over its handling of Afghan refugees; the designation for Afghanistan came only after the administration offered temporary protected status to Ukrainians who were already in the United States.

While advocates applauded the designation for Ukraine, which came on the same day Canada and the European Union made similar humanitarian gestures to aid millions of Ukrainians last week, they questioned why the Biden administration has not offered temporary status to people from other war-torn countries, including Cameroon and Ethiopia.

Like much in the U.S. immigration system, the temporary protected status program faces its own backlogs. According to U.S. Citizenship and Immigration Services, which handles the program, it takes an average of six months to process applications. And even though the announcement for Afghans came on Wednesday, people cannot apply until the government places an official notice in the Federal Register, a process that can take weeks in some cases.

“Good policy is going to fall flat if it can’t actually be implemented in a way that allows people to benefit,” said Lisa Parisio, the director of advocacy for Catholic Legal Immigration Network Inc.

With Wednesday’s announcement, there are now 13 countries with temporary protected status. At the end of September, there were nearly 300,000 applications pending.

More than 400,000 people are currently under the program, including immigrants from El Salvador, Haiti, Sudan, Syria and Venezuela. The protection is granted for six to 18 months, and the Homeland Security Department must extend a country’s designation on a recurring basis. Each time a country is recertified, recipients reapply and pass a security check.

Groups that favor limiting immigration have criticized the program, in effect since 1990, for essentially allowing people to remain permanently in the United States. Indeed, many of them have been here for decades.

Thousands of Afghans have applied for, and been denied, entry to the United States through humanitarian parole. That status is intended to allow people facing emergencies to gain admission to the country quickly and without a visa, which can take months or years to obtain. Thousands more applicants are still waiting to hear the outcome of their cases while living in danger, according to lawyers representing them.

Afghans airlifted during the pullout spent several months on U.S. military bases before being released into communities around the country, where many of them remain in hotels as nonprofit agencies contracted by the government, like Lutheran Immigration and Refugee Service, HIAS and the International Rescue Committee, try to secure housing for them.