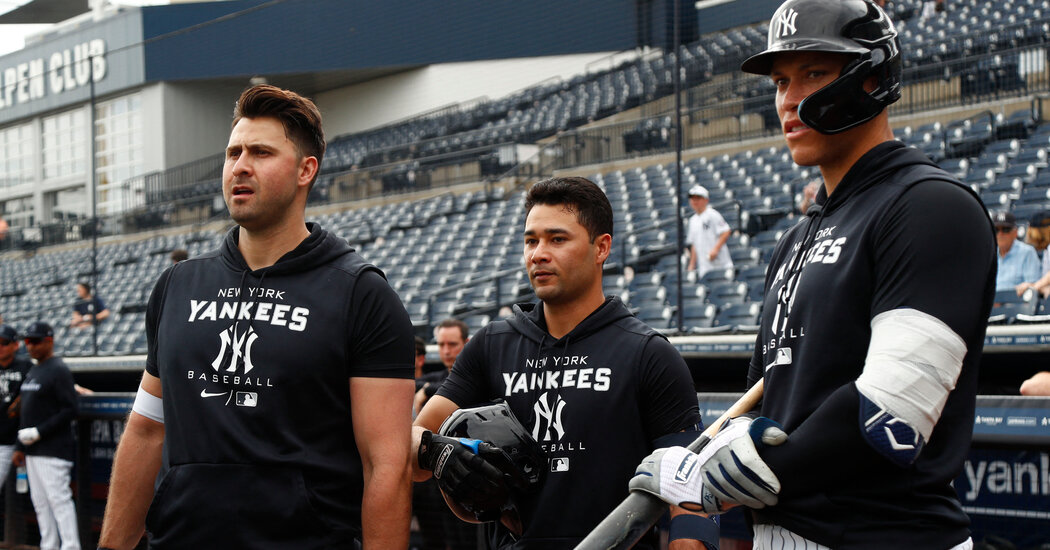 TAMPA, Fla. — For so long in Major League Baseball, the Yankees sat atop the payroll rankings. George Steinbrenner, the billionaire who reigned over the team for 37 years until his death in 2010, loved to spend and to win. His franchise earned seven World Series titles during his stewardship.

The Yankees operate a little differently now. Hal Steinbrenner, 52, the Yankees’ managing general partner, is more analytical and less impulsive than his father.

Other teams also evolved. The Los Angeles Dodgers changed owners in 2012 and then opened up the checkbook to build competitive rosters, including one that won the 2020 World Series. The Boston Red Sox spent a lot, too, and won the 2018 World Series. And now a new dynamic exists in New York: Under the second-year owner Steven A. Cohen, a billionaire, the Mets are no longer the thriftier team in the city and they currently boast the highest payroll in M.L.B.

So when Steinbrenner met with reporters on the third day of this delayed and abbreviated spring training, he was asked if Cohen’s big spending had put any more pressure on him to follow suit.

“Everybody expects that I do but the answer is no,” Steinbrenner said on Wednesday as he stood outside the Yankees clubhouse at the team’s spring training facility here. “Because the fact is I can’t control what resources other owners or other teams have, and what they’re going to do with those resources. I make the same commitment every year. My family does, which is to do everything we’re able to do to field the championship caliber team and try to win a World Series.”

Later noting he had shared a few meals with Cohen, Steinbrenner added: “It’s great for the fans in New York to have two competitive baseball teams. We’re in different leagues, but to a certain extent we’re rivals, and it’s going to make the summer a lot of fun.”

The Yankees have had many talented rosters and have spent a great deal over the years, but they haven’t won a World Series since 2009. Large payrolls don’t always net championships. Still, though, Yankees fans expect a lot from a popular franchise with a valuation exceeding $5 billion — the highest in M.L.B. — and that is owned by a family who also has its hands in a television network, a hospitality company and a professional soccer team.

Players’ salaries are public, but owners’ revenues, for the most part, are not. Atlanta offered a recent glimpse into the numbers of a successful team by way of its status as the only team that is controlled by a publicly traded company in the United States. The team reported a $104 million profit in 2021, and its revenue per home game was $6 million. Although the Yankees weren’t as successful on the field as Atlanta, which won the 2021 World Series, they are a much bigger entity than their Atlanta counterparts.

When asked why the Yankees didn’t fill their needs by signing a marquee free-agent shortstop (such as Carlos Correa) or first baseman (such as Freddie Freeman), Steinbrenner listed a few reasons: two “incredible” infield prospects in the organization, the effects of the pandemic and “other factors that have to do with the individual players.” He said he was willing to discuss any opportunity the front office presents to him.

Asked if the pandemic was still affecting the budget for the roster, Steinbrenner countered by saying the Yankees were already over the first luxury tax threshold ($230 million in 2022) before they pulled off a trade headlined by third baseman Josh Donaldson, 36, who won the 2015 American League Most Valuable Player Award and has $50 million guaranteed to him on a contract that runs for two years and then has a buyout.

The Yankees could free up more cash with trades, but on Tuesday they reunited with first baseman Anthony Rizzo, 32, on a two-year, $32 million deal.

“That’s my job every year, to make sure that we’re financially responsible,” Steinbrenner said. “I’ve got a lot of partners and banks and bondholders and things like that that I answer to. But at the same time, it’s always the goal to win a championship.”

He added, referring to the team’s longtime general manager, Brian Cashman, “I think we got a pretty good history of having high payrolls and putting a good amount of resources into the players we have.”

According to FanGraphs, the Yankees’ 2022 payroll for luxury tax purposes sat at $258 million. The Mets, meanwhile, were at $285 million, and Cohen has said that he won’t let a new, fourth luxury tax threshold of $290 million stop him.

Asked to elaborate on the financial challenges of the pandemic, Steinbrenner noted that the truncated 60-game 2020 season was played without fans. He said the larger market teams were hit hardest. He said that the team’s expenses — not just players — are greater in New York. He also pointed to the annual “huge payment” of more than $80 million to New York City to cover the bonds of Yankee Stadium, a largely publicly funded facility that opened in 2009 and cost more than $2.3 billion to build.

“That payment is made if we have no revenue, and it was made in ’20 and it was made last year as well,” Steinbrenner said. “We can talk about our revenues, but you’ve got to pay attention to the expenses too, and we’ve got some significant ones. So it was a tough two years.”

Steinbrenner, who was part of the M.L.B. owners’ committee negotiating a new labor agreement with the players’ union, said he was optimistic about his current squad. Although he said would miss catcher Gary Sánchez and infielder Gio Urshela, both of whom went to Minnesota in the Donaldson deal, the trade addressed a few of the Yankees’ weaknesses.

“This team’s got a lot of experience,” he said. “It’s a veteran team. They got a lot of heart. I think we’re going to see great things this year.”