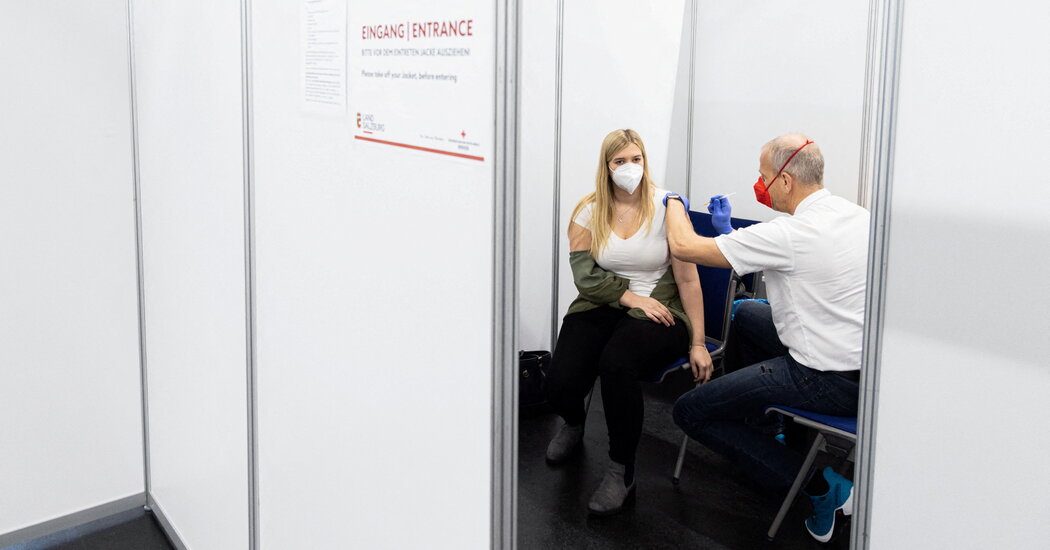 Austria is the first Western democracy to mandate Covid vaccinations for nearly its entire adult population, a once-unthinkable move that is being seen as a test case for other countries grappling with pockets of vaccine resistance.

The sweeping measure, which easily cleared its final parliamentary hurdle on Thursday when it was approved by lawmakers in Austria’s upper house, will be signed into law as soon as Friday by President Alexander Van der Bellen of Austria.

The requirement will be introduced in phases.

First, the government plans to send a letter to all Austrians in the next few weeks, notifying them of the new rules and giving them a month to comply. Exemptions will be available only to pregnant women, people who cannot be vaccinated for medical reasons and people who have recently recovered from Covid-19. In this first phase, no fines will be imposed for failure to comply.

That changes in mid-March, when the police are to start conducting random checks of vaccination status — including during traffic stops. People who cannot produce proof of vaccination can be fined up to 600 euros (about $675). Those who contest their fines could eventually see them increased to €3,600 (about $4,100).

In a third phase, for which no starting date has yet been set, the government would create a formal vaccination registry of all residents, and automatically assess fines for noncompliance. If the pandemic recedes enough, though, this phase might never be put into effect, officials say.

Polls suggest that many Austrians support the mandate, but the issue has also galvanized a noisy protest movement there. Tens of thousands of demonstrators have taken to the streets across the country in recent months to oppose pandemic restrictions, chief among them the vaccine mandate, which was first proposed in November. At the time, cases were surging in the country, driven mostly by unvaccinated people, and Austria introduced a lockdown that applied only to the unvaccinated.

About 76 percent of people in Austria are now fully vaccinated. Even so, a new surge that began in late December has sent new cases soaring to record levels; the daily average has nearly doubled in the past two weeks.

Making vaccines mandatory rather than voluntary has been a threshold that European democracies have long seemed unwilling to cross. Leaders have stressed respect for civil liberties and drawn contrasts with the policies of more authoritarian governments.

But as the pandemic stretches into a third year with vaccination rates plateauing in a number of countries, some leaders have changed their minds.

Around the world. Several countries are easing their pandemic protocols, though public health leaders at the World Health Organization continued to urge caution about relaxing restrictions. In Austria, a sweeping Covid vaccine mandate is set to become law.

Developments in the research field. Intranasal vaccines currently under development may make better boosters by stopping the coronavirus in mucosal linings of the airways. Nasal immunization has already been shown to be effective in protecting mice, ferrets, hamsters and monkeys against the coronavirus.

“The path to freedom is the vaccine mandate,” Chancellor Karl Nehammer of Austria said when the law was debated in Parliament last month.

Last year, when he was interior minister, Mr. Nehammer noted the difficulty governments faced in persuading skeptical people to get inoculated voluntarily.

“It is not a question of ideology, it is a question of convincing,” he said. “We can’t do and try enough to convince so that the unvaccinated get vaccinated.”

Other countries are watching Austria’s move to a near-universal mandate closely.

In neighboring Germany, where about one in three people are not considered to be fully vaccinated, Chancellor Olaf Scholz has announced plans for a general vaccine mandate, and the country is slated to introduce one next month for health care workers and residents of nursing homes and care facilities. Italy now requires nearly everyone over 50 to be vaccinated; Greece has a similar rule for residents over 60.