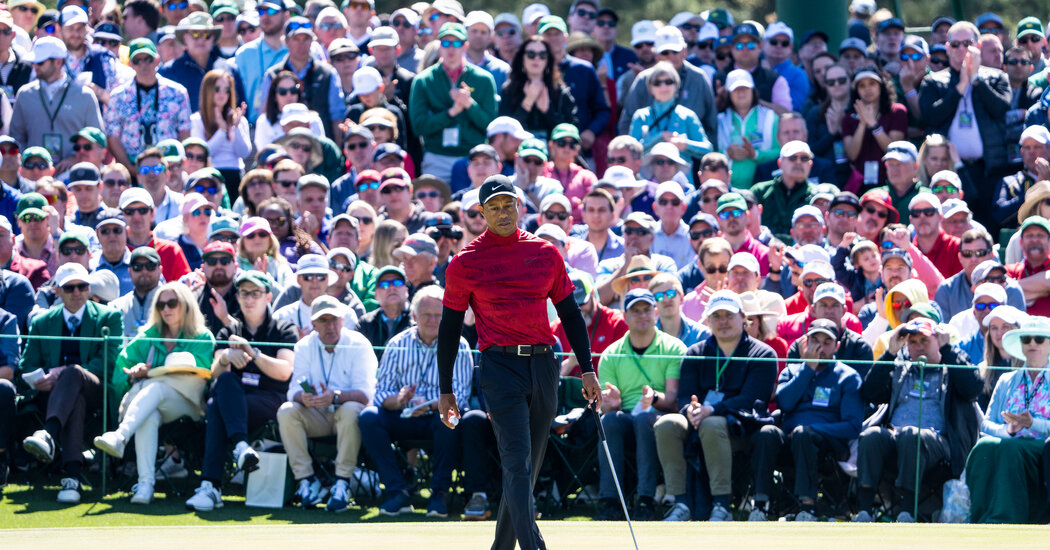 AUGUSTA, Ga. — Tiger Woods had 212 yards to the fifth green on Sunday morning. Holding a long iron, he swung with appropriate velocity and rhythm. But something was amiss at contact with the ball, and in the millisecond it took for Woods to transition from downswing to follow-through, he let go of the club. It flung to the ground over his left shoulder.

The shot bounced 30 yards short of its target, and Woods grimaced. His shoulders sagged. He sighed and retrieved the club from the grass and slowly limped forward heavily favoring a right leg surgically reconstructed after his car crash on Feb. 23, 2021.

The 2022 Masters Tournament, which began with a smiling Woods thrilled to be back at the Augusta National Golf Course surrounded by a supportive group of colleagues, was playing out for him in its final hours in small, humbling ways.

Woods’s miscue on the fifth hole of the final round was one of many gaffes, in this case the second of three consecutive bogeys on the front nine. Ever since his startling, inspiring opening-round one-under-par 71, Woods has wilted piecemeal — betrayed by a sore right leg, a balky back bothered by chilly weather and the demands of walking and playing for seven successive days for the first time in 17 months.

By Sunday, the crowds that swarmed his opening rounds had thinned considerably as fans were rushing to position themselves to see the fourth-round leaders, who would tee off three hours later.

But as Woods walked uphill to the 18th green, the sizable crowd of fans who waited for him applauded thunderously.

After a double bogey on No. 17 and a 4-foot putt for par on No. 18, Woods finished the round six over par, 13 over for the tournament. He pumped hands with his playing partner, Jon Rahm, tipped his cap to the crowd and walked off the green, smiling and limping.

It was not the conclusion Woods envisioned when he willed himself to make an improbable return to elite competitive golf less than five months after declaring his days as a top player all but over. But Woods emphatically does not view his four-day score at this year’s tournament as the measure of his appearance.

After Thursday’s first round, Woods, who for a quarter-century has been renowned for saying that his only goal at any competition is to win it, was asked if just showing up at Augusta National was a victory.

It was a revealing confession for Woods, but it elucidates the image of him slowly ascending the hilly terrain on Sunday, often wincing. He finished nowhere near the leaders, but he finished nonetheless.

After his final round, Woods said he was grateful, after all he has been through, to have played this year at the tournament he has won five times, and that continued to mean so much to him. He said the week was his greatest achievement for a tournament that he did not win.

He added: “It’s been a tough road and you know, one I’m very thankful to have the opportunity to be able to grind through a lot of different things could have happened. But in 14 months, I’m able to tee it up and play in the Masters.”

It is likely that Woods will not play again until the P.G.A. Championship in mid-May in Tulsa, Okla. Woods has said his schedule going forward might be modeled after the approach Ben Hogan took when he returned to golf from a car wreck in 1949. Hogan had fractures of his collarbone, pelvis, a rib and an ankle, as well as other serious injuries. Hogan won the U.S. Open the next year and two more major golf championships in 1951 but skipped many other tournaments.

In November, in his first public comments since his accident, Woods evoked Hogan’s comeback as a paradigm to follow.

“I think something that is realistic is playing the tour one day — never full time ever again — but pick and choose, just like Mr. Hogan did,” he said. “Pick and choose a few events a year and you play around that.”

On the 10th tee on Sunday, Woods took yet another ferocious swing of his driver. He held on to his club and leaned on it as his ball hooked left into the woods.

Then Woods used the club like a cane to support his right side as he descended the steep slope that led to an 80-foot elevation drop from the tee box to the distant fairway. When he reached flatter ground, Woods handed his driver to his caddie, Joe LaCava, and soldiered on.