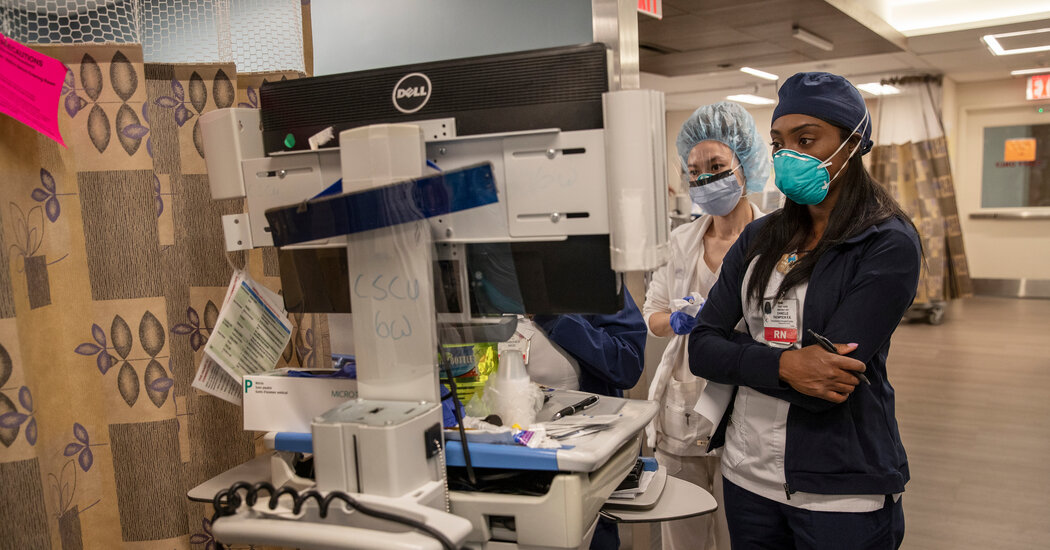 American hospitals are once again filling up with coronavirus patients — but not with nurses to care for them. The nation’s chronic shortage of registered nurses is as bad in some parts of the country as it has ever been, experts say, and it is showing signs of getting worse.

Hospitalizations have risen steadily in recent weeks, and the daily average number of people in hospitals who are infected with the coronavirus now exceeds 39,000, the highest it has been since the waning days of the first Omicron surge in early March. The rise is being driven largely by BA.5, a rapidly spreading Omicron subvariant that is the best yet at evading some antibodies from previous infections or vaccines.

But in the face of the growing need, hospitals across the country say they still cannot find enough nurses.

In New York State, the shortage is at an “all-time high,” said Matthew Allen, a registered nurse at Mount Sinai Hospital in New York City and a board member of the New York State Nursing Association. “It’s just historic, more than it’s ever been before,” Mr. Allen said, noting that as of last week, Mount Sinai’s hospital network alone had 71 unfilled registered nurse and nurse practitioner positions.

Nearly 14 percent of nursing jobs at acute-care hospitals in Massachusetts are unfilled, a shortfall that has doubled in size since 2019, according to a recent survey by the Massachusetts Health and Hospital Association. The association found more than 5,000 unfilled nursing positions at hospitals in the state.

To close the gaps, hospitals are offering financial incentives for new hires, bringing in more freelance nurses and in some cases cutting services that they cannot adequately staff to provide.

Martin General Hospital, a 49-bed facility in eastern North Carolina, said this week that it would temporarily shut down its intensive care unit starting in August because of the difficulty of finding nurses.

“The critical shortage levels are even more challenging in rural areas,” John Jacobson, the hospital’s chief executive, said in a statement.

At Johnson Memorial Hospital in Stafford Springs, Conn., inpatient and outpatient surgery has been halted since June 9. The hospital said on Wednesday that it would seek to discontinue inpatient surgical services permanently, and would shut down its labor and delivery unit, in part because of staffing shortages, according to Mary Orr, a hospital spokeswoman.

The shortage of nurses in Florida is “probably the worst” that hospitals have experienced in decades, said Mary Mayhew, chief executive of the Florida Hospital Association, which represents more than 200 hospitals and health systems in the state.

Part of the problem, Ms. Mayhew said, was the large number of nurses who were leaving regular hospital jobs to earn more money as temporary and contract nurses. “We have a turnover rate that is 25 to 30 percent, the highest we have ever seen in the decades we’ve been tracking that data,” she said.

The reliance of the association’s member hospitals on temporary nursing staff, once minimal, has soared more than fivefold since 2019, Ms. Mayhew said.

Broward Health, a health care system in Florida, is trying to fill 400 vacant nursing positions by offering bonuses of up to $20,000 and other incentives, a hospital spokesperson said.

Demand for nurses is projected to keep growing significantly in the United States. The McKinsey consulting firm projected in a report in May that the nation could face a shortage of up to 450,000 nurses by 2025.

Demand for travel nurses, who are brought in from out of town by staffing agencies to fill gaps at hospitals for a few weeks or months, climbed to a record high in 2021, and after receding somewhat earlier this year, has been rising steadily again since May, according to said April Hansen, group president at Aya Healthcare, one of the nation’s major providers of travel nurses.

“It’s been like a roller coaster,” Ms. Hansen said. “We are at a point in time now where demand is more than double the steady-state demand that existed in prepandemic times.”

She said wages for travel nurses were 20 percent higher now than before the pandemic took hold, and at one point had spiked to about double the prepandemic average.

While Aya Healthcare declined to be specific about the wages, another staffing company, Vivian Health, said in a June report that the national average for travel nurse pay was $3,004 a week, a 23 percent increase from the previous year’s average of $2,450.