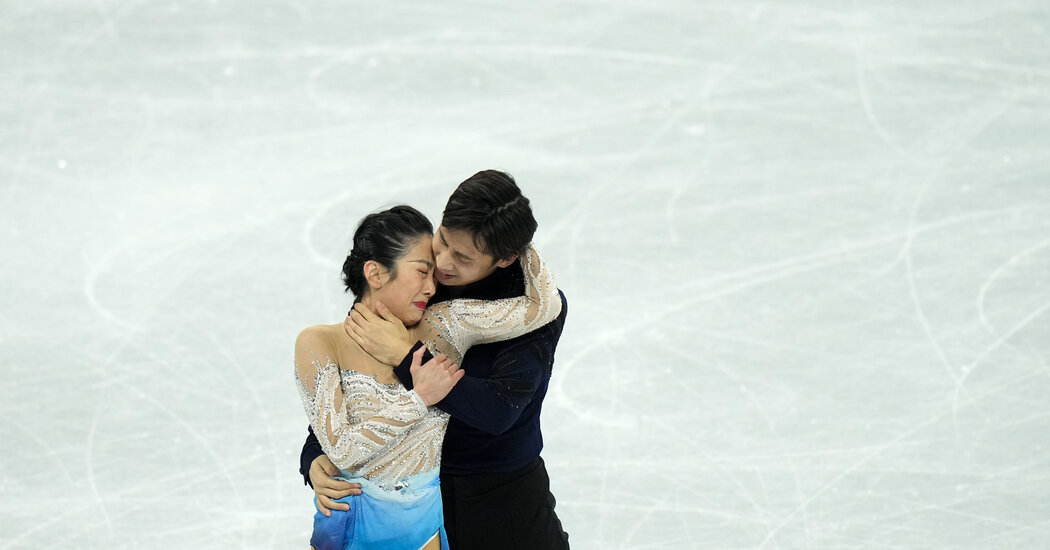 Four years after they finished a heartbreaking second at the last Olympics, China’s Sui Wenjing and Han Cong finally won the gold medal in figure skating’s pairs event on Saturday. Their victory, likely the last medal for the host nation, capped two scandal-tinged and tear-stained weeks for their sport with a nearly flawless performance, and added an exclamation point to China’s best-ever medal haul from a Winter Games.

Sui and Han already knew the sting of a razor-thin margin at the Olympics. On Saturday, at last, they got to experience the joy of being on the winning side of one.

Their gold, just like their silver four years ago, came by the finest of margins: 63-hundredths of a point. When their score was posted on the scoreboard at the Capital Indoor Stadium in Beijing, confirming their victory over the Russian pair of Evgenia Tarasova and Vladimir Morozov, Sui and Han immediately began crying tears of joy. Within seconds, they disappeared into a celebratory scrum of coaches and team officials, including one holding a large Chinese flag.

With a 239.88 total points after winning both the short program on Friday and the free skate on Saturday, Sui and Han barely held off Russia’s Tarasova and Morozov (239.25 points). Another Russian pair, the reigning world champions Anastasia Mishina and Aleksandr Galliamov, finished third, less than two points behind.

In a moving performance to “Bridge Over Troubled Water,” Sui and Han leapfrogged Tarasova and Morozov, who had taken the lead only minutes earlier with their own impressive free skate. The Chinese pair, though, had momentum behind them: They had set a world record for points in the short program on Friday, and then returned Saturday and broke the record for total score. And they had done it all with the eyes of a nation on them.

Before the Games, China’s sports director had set a goal for China’s team: to surpass the country’s previous high for gold medals at the Winter Games. The number to beat was five. Sui and Han’s gold was China’s ninth in Beijing.

The two are beloved in China, and have perhaps the best nickname of any Olympians. On Weibo, the Chinese social media platform, Sui and Han are known collectively as Bucket of Scallion. The name dates to when they were teenagers, and Sui said her body was shaped like a barrel. Since Cong’s name sounds similar to the Mandarin word for scallion, fans put them together.

Sui and Han, who are both from Harbin, a city with long, harsh winters, were eager for redemption after losing the gold medal to a German team at the 2018 Pyeongchang Games by 43-hundredths of a point.

In Beijing, the Chinese pair faced tough competition from three Russian pairs who had lined up behind them in the standings after the short program. One by one on Saturday as the free skate built to its conclusion, one Russian team after another took the lead only to surrender it minutes later to the Russians that followed them.

None of the Russians, though, were good enough to beat Sui and Han, who bathed in the applause of the small crowd of their countrymen who had been invited to watch the free skate.

Afterward, Sui praised China, its Olympic preparations, the support she and Han had received and their coaches.

“And also,” she added, “we want to thank our parents, who must have gone through a lot in front of the TVs.”