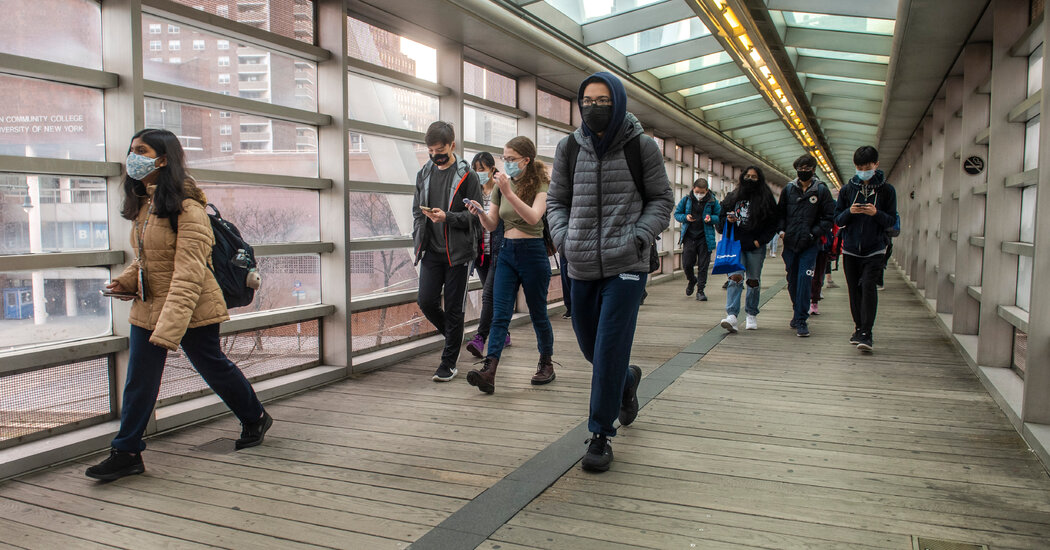 For the first time in two years, students in New York City were allowed to attend public school without masks on Monday, but some of them said they would keep them on.

At elementary schools and high schools, students and parents alike expressed concern that it was too soon, despite the declarations by Mayor Eric Adams that the city has beaten back the Omicron variant of the virus.

But only 52 percent of K-12 public school students citywide are fully vaccinated, according to city data, and 59 percent of students have received at least one dose. The city’s count also shows that the doses have not been distributed equally.

At Stuyvesant High School in Lower Manhattan, where 93 percent of students are vaccinated, one of the highest rates in the city, more than half a dozen students said before the school day started that they would keep their face coverings in place. A few said they planned to wear masks indefinitely.

“There really is no cure for Covid at this point,” Ella Chan, 17, a junior at Stuyvesant, said before the 8 a.m. bell. “There’s just too much uncertainty for me.”

Eden Di Lella, 15, a sophomore, said: “I’ve also just been asking around, just being curious about who’s really keeping the masks on, and it just has been an overwhelming number of yeses, compared to taking it off.” She noted, though, that others had mentioned exceptions for chorus or gym class.

Max Shimbo, 14, was one of the few not wearing a mask. “I trust the people in the mayor’s office,” he said of how he made his decision. “They know how many cases we’re getting and how many people are vaccinated, so I trust they made the right choice.”

On Staten Island, Richard Kreie, 5, a kindergartner, was so relieved about the end of the mask mandate that on Friday after school he stomped on his and threw it away. On Monday morning before heading into school at P.S. 1 in the Tottenville neighborhood, where 10 percent of the students are vaccinated, he pulled down his lower lip to show why. One of his bottom teeth just had dropped out, and he couldn’t wait to mug with the new gap in his smile. “I love it,” he said. “It’s fun.”

His mother, Danielle Imparato, said she was happy about the end of the mandate. “It was good at first,” she said. “But it’s long past time now.”

Emma Billera, 7, a second grader at P.S. 1, said taking her mask off made her feel “happy, so you can breathe.”

Her mother, Gabby Billera, said she was weary of the mask mandate. “We’ve been following the rules, but nobody knew it would be this long,” she said.

But some older students said they worried that the mandate had been lifted too early.

“I think that it’s dumb, because Covid is still around, and just two months ago the cases flared up out of nowhere,” said Alana Rivers, a 15-year-old freshman at Boys and Girls High School in the Bedford-Stuyvesant neighborhood of Brooklyn, where 46 percent of the students are vaccinated. “So I think that if you take off the masks, it’s going to make things worse.”

She said she still planned to wear a mask. “I feel nervous because a lot of people are going to be exposed to Covid outside of school and now in school,” she said.