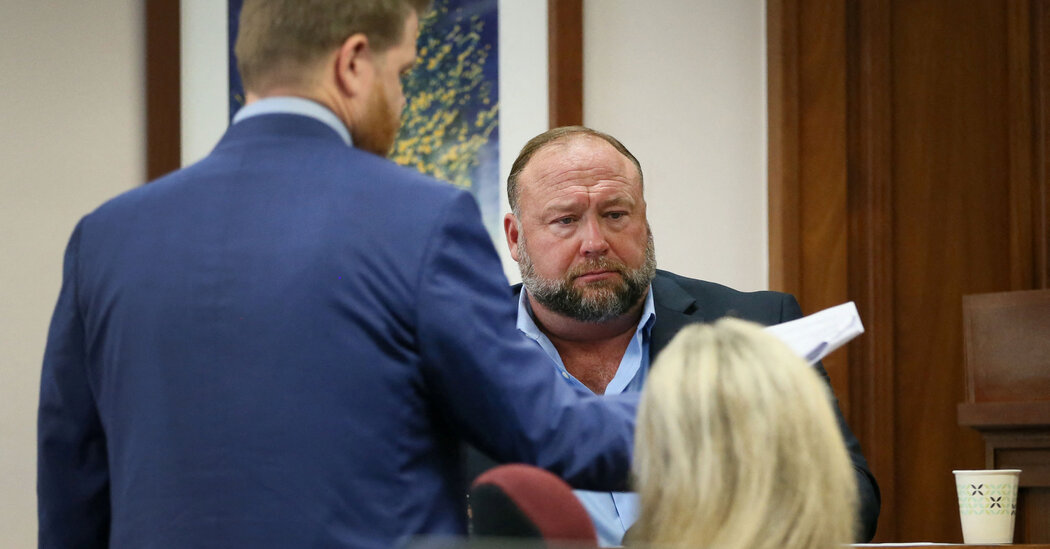 AUSTIN, Texas — In a brutal cross-examination on Wednesday in the trial of the conspiracy theorist Alex Jones, a lawyer for Sandy Hook parents produced text messages from Mr. Jones’s cellphone showing that he had withheld key evidence in defamation lawsuits brought by the families for lies he had spread about the 2012 school shooting.

The messages were apparently sent in error to the families’ lawyers by Mr. Jones’s legal team.

“Mr. Jones, did you know that 12 days ago, your attorneys messed up and sent me an entire digital copy of your entire cellphone with every text message you’ve sent for the past two years?” the parents’ lawyer, Mark Bankston, asked Mr. Jones.

The text messages were significant because Mr. Jones had claimed for years that he had searched his phone for texts about the Sandy Hook cases and found none.

“You know what perjury is, right?” Mr. Bankston asked Mr. Jones, who indicated that he did.

The disclosure of the texts provided a striking capstone to the final day of testimony in a trial to determine how much Mr. Jones must pay the parents of a child who died in the shooting at Sandy Hook Elementary School in Newtown, Conn., for broadcasting conspiracy theories that the shooting was a hoax and that the families were “actors.” The jury began deliberating late Wednesday.

The texts also revealed that Mr. Jones was warned about posting a false report about the coronavirus by a staff member calling the report “another Sandy Hook” for spreading disinformation about an event.

He acknowledged the staff member’s concerns, but Mr. Bankston said the false report remained live on his Infowars website on Wednesday.

Mr. Jones is also under scrutiny for his role in planning events around the attack on the Capitol, so the texts could be of interest to the House Jan. 6 committee.

“We fully intend on cooperating with law-enforcement and U.S. government officials interested in seeing these materials,” Mr. Bankston said.

The file with Mr. Jones’s texts is part of a raft of material related to the Sandy Hook cases mistakenly delivered to the families’ lawyers. Mr. Bankston estimated that the files relayed to him in apparent error by Mr. Jones’s lawyers contained several hundred gigabytes of material.

Mr. Bankston, who is representing the Sandy Hook parents Scarlett Lewis and Neil Heslin at the trial, also revealed new evidence of Mr. Jones’s failure to produce court-ordered documents related to lies he spread about the mass shooting and its victims. Visibly uncomfortable for most of the 40-minute cross-examination, sweat running into his eyes and down his neck, Mr. Jones said he “100 percent” believed that the shooting occurred.

Mr. Bankston also presented financial records that contradicted Mr. Jones’s claim under oath on Tuesday that he was bankrupt, and clips from his broadcasts maligning the judge and jury in the case.

Mr. Jones lost four defamation cases last year that were filed against him by the families of 10 victims of the shooting, which killed 20 first graders and six educators.

Mr. Jones lost those cases by default, after nearly four years of litigation in which he failed to produce documents and testimony ordered by courts in Texas and Connecticut. That set in motion three trials for damages; the one in Austin this week is the first.

In testimony on Tuesday and Wednesday morning, Mr. Jones continued to insist that he had complied with court orders to produce documents and testimony in the run-up to the defamation trials. In fact, his losses by default resulted from his failure to produce those materials.

He also repeatedly tried to claim that his right to free speech protected him. But by defaulting in the defamation cases because he failed to comply with discovery by withholding documents and testimony, he lost the opportunity to test that claim at trial. The current trial and the two upcoming trials are only to decide the amount he must pay the families in damages.

The judge admonished Mr. Jones and his lawyer, F. Andino Reynal, after the Infowars fabulist lied about the matter under oath on Tuesday. The judge also chastised Mr. Jones for telling the jury that he was bankrupt when his bankruptcy filing last week has yet to be adjudicated; the families’ lawyers say it is his latest attempt to delay the upcoming damages trials. A federal bankruptcy court in Texas ruled that the current trial could proceed, but the others are delayed for now.

In court on Wednesday, Mr. Bankston produced financial records indicating that Mr. Jones was earning revenue of as much as $800,000 per day in recent years by selling diet supplements, gun paraphernalia and survivalist gear in ads accompanying his broadcasts. Mr. Jones tried to accuse the families’ lawyers of cherry-picking the most lucrative daily revenues, but he was silenced by the judge.

Mr. Bankston also produced clips from Mr. Jones’s Infowars broadcast in which he aired a copy of a photograph of the judge in Ms. Lewis’s and Mr. Heslin’s case, Maya Guerra Gamble, engulfed in flames.

In another broadcast, Infowars falsely linked the judge to pedophilia and human trafficking; in another, Mr. Jones questioned the intelligence of the jurors in the case, implying that his political enemies had handpicked “blue-collar” people who “don’t know what planet they’re on,” and were ill-equipped to decide what monetary damages he must pay Ms. Lewis and Mr. Heslin. In written questions submitted to Mr. Jones, jurors took immediate issue with that characterization.

“Are you aware that this jury consists of 16 intelligent, fair-minded citizens who are not being improperly influenced in any way?” one wrote to Mr. Jones.

“I don’t think that you are operatives,” Mr. Jones replied.

Ms. Lewis and Mr. Heslin are requesting $150 million in damages from Mr. Jones. But more than money, they have said the case represents an opportunity to alert Americans to the societal harms posed by the viral spread of disinformation over the decade since Sandy Hook.

In closing remarks on Wednesday, Mr. Jones’s lawyer said he was prepared to pay a single dollar to Ms. Lewis and Mr. Heslin for each of the eight defamation claims.