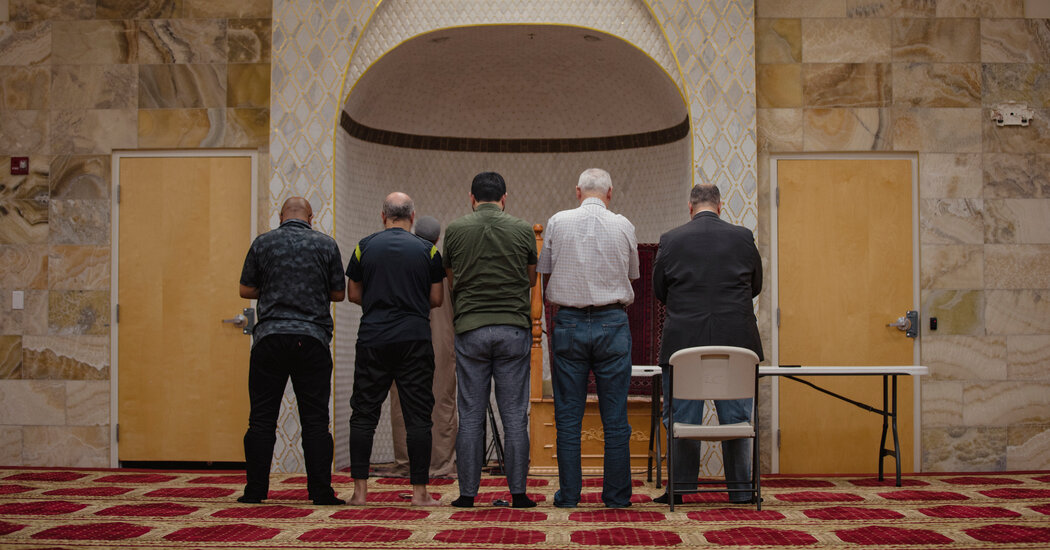 ALBUQUERQUE — For days, the news that someone might be killing Muslim men in Albuquerque spread fear among the city’s Muslim residents, some of whom were so afraid of becoming the next target that they fled town or hunkered down in their homes.

On Tuesday, the police said they had arrested a man who was himself Muslim and who may have targeted at least two of the victims because he was angry that his daughter had married a man from the other major branch of Islam.

The police said the man, Muhammad Syed, 51, would be charged in two of the killings and that he was a suspect in the other two deaths.

Ahmad Assed, the president of the Islamic Center of New Mexico, a mosque that at least three of the victims had attended, said the authorities told him that the suspect was a Sunni Muslim, and may have targeted the victims because he was angry over his daughter marrying a Shiite Muslim.

He and the police cautioned that details remained sparse, and Mr. Assed noted that at least one of the victims was Sunni.

Police officials said they were not yet sure if a dispute over a marriage was the sole motive, but said they were aware of it and had found evidence that an “interpersonal conflict” may have led to the shootings.

The police in Albuquerque first disclosed last Thursday that three killings between November and August could be linked. The next day, a fourth Muslim man who worked as a truck driver was shot and killed in his car, raising further alarms in a city where many refugees and immigrants said they had long felt safe.

As word spread, the authorities received tips about the suspect and a possible vehicle linked to one of the killings. As police officers prepared to execute a search warrant at Mr. Syed’s home on Monday, he drove away in that same vehicle, Kyle Hartsock, a police deputy commander, said at a news conference. Officers stopped and arrested him near Santa Rosa, N.M., which is about 115 miles east of Albuquerque.

Commander Hartsock said that the police found several guns at Mr. Syed’s home and one in the car he was driving, and that they believed two of the weapons were connected to the killings of one man on July 26 and another on Aug. 1. He said the police were continuing to run tests on other firearms that they had recovered and believed that Mr. Syed may have also been involved in two additional killings, one in November 2021 and the truck driver on Friday.

Mr. Syed had immigrated from Afghanistan and lived in Albuquerque for five or six years, Commander Hartsock said. He said Mr. Syed had faced several domestic violence charges in recent years that were later dismissed.

The Killings of Muslim Men in Albuquerque

Mr. Syed’s sons were questioned after his arrest and were later released, Commander Hartsock said.

The report of an interpersonal conflict that could be linked to a sectarian dispute raised the specter of the kind of violence that many immigrants from conflict-ridden countries had hoped to leave behind.

Sunni and Shiite Muslims differ in their beliefs over who was the proper successor to the Prophet Muhammad when he died nearly 1,400 years ago, a foundational dispute that today drives rivalries over religion, territory and political power. The conflict has fueled sectarian violence in several countries, including Iraq, Lebanon and Afghanistan, but it has been rare in the United States.

Muslim groups quickly condemned the killings and any hint of conflict in the U.S. Islamic community.

“Like Protestants and Catholics, the Sunni and Shia communities in this country live near each other, work with each other and marry each other in peace,” said Edward Ahmed Mitchell, the deputy director of the Council on American-Islamic Relations, a civil rights group. “There is no significant history of violence at all in the U.S. between Shias and Sunnis.”

For years, the authorities in Albuquerque had sought to shape the city into a haven for immigrants. Hundreds of refugees from Afghanistan have settled in the city over the past year, since the withdrawal of the U.S. military in that country.

The latest killings come as Albuquerque has been upended by a harrowing spike in gun violence, with the city on pace to see more murders this year than any other on record.

The police said Mr. Syed would be immediately charged in two of the killings: Muhammad Afzaal Hussain, 27, who moved from Pakistan to attend the University of New Mexico and had become president of its graduate student association before going into city planning; and Aftab Hussein, 41, who worked at a local cafe.

Naeem Hussain, the 25-year-old who was killed on Friday, had started his own trucking business and become a U.S. citizen just weeks earlier.

The recent killings were preceded by the fatal shooting in November of Mohammad Ahmadi, 62, a Muslim immigrant from Afghanistan, who was attacked outside the grocery store that he owned with his brother.

“There are recent arrivals who are fearful, and there are people who are U.S.-born Muslims who are also are on edge,” said Michelle Melendez, director of the city’s Office of Equity and Inclusion. “The victims are everything from professionals to students to working-class people.”

Scrambling to respond, the Albuquerque Police Department began bolstering patrols around the businesses and places of worship that serve as gathering places for the city’s Muslims, estimated to number from 5,000 to 10,000 in a city of over half a million.

In a plea for help from the public, the police over the weekend released a photo of a car, thought to be a dark gray Volkswagen sedan, which they believed was used in the killings.

The fatal shootings came amid a string of murders in the city, explaining, perhaps, why it didn’t seem unusual for the first two killings of Muslim men to go relatively unnoticed.

In 2021, 116 people in the city were killed, according to crime statistics from the Albuquerque Police Department, which exclude justified or negligent homicides. It was the city’s deadliest year on record; one person was killed an average of every three days in November 2021, when Mr. Ahmadi was found dead.

Things have only become worse this year. As of Monday, homicides are on pace to reach 131, surpassing last year by more than a dozen. That’s more than double the average number of homicides from 2010 to 2020, when the city recorded about 53 killings each year.

At the same time, Albuquerque, like other cities around the country, has struggled to fill vacancies in its police force. Since 2014, the department has been under a settlement agreement with the Justice Department to improve its practices, reached after accusations of civil rights violations and excessive force.

Before going into truck driving, Naeem Hussain, the most recent victim, had worked as a case manager for Lutheran Family Services, helping refugees. It was in the parking lot of that organization where Mr. Hussain, a Pashto speaker who had family roots in Pakistan and Afghanistan, was killed while in his car.

Mr. Assed, the president of the mosque, grew up in Albuquerque and described the community as a “welcoming melting pot.” He almost never felt that he stuck out as a Muslim, he said, until a woman was arrested and accused of trying to burn down the mosque last year.

Mr. Assed, who was born in Dearborn, Mich., said that even with increasing xenophobia after the Sept. 11 attacks, Albuquerque seemed to continue to treat the Muslim community with respect, regardless of faith and nationalities.

Now many Muslims in the city feel like targets, and fear is even driving some people to make plans to leave New Mexico.

Indeed, the killings have jolted an increasingly diverse city, where immigration, largely from Mexico and other Latin American countries, is a major source of population growth and integral to the city’s history. Immigrants from the Middle East, including Muslims and Christians from Lebanon and Syria, put down stakes in Albuquerque and other parts of New Mexico in the late 19th century.

The city gradually saw a new wave of Muslim immigrants in recent decades, with many coming to study at the University of New Mexico. A group of Muslim students came together in the mid-1980s to form the Islamic Center of New Mexico, which the three most recent victims attended.

Many in the city’s Muslim community come from Pakistan and Afghanistan, while others are from countries including India, Turkey, Syria, Iraq and Sri Lanka. During the Trump administration, when concerns grew over bigotry directed against Muslims, officials passed a bill affirming Albuquerque’s status as an “immigrant friendly” city. It restricted federal immigration agents from entering city-operated facilities and city employees from collecting immigration status information.

At least 300 Afghan refugees have arrived in Albuquerque over the past year, bolstering a growing community reflected today by at least eight different places of worship for Muslims. Albuquerque strengthened outreach efforts through translators speaking Arabic, Dari, Farsi, Urdu and Pashto — languages that officials have prioritized in recent days when sharing information about the killings.

Although Muslims in the United States faced violence and discrimination after Sept. 11 and during Donald J. Trump’s presidential campaign, the apparent serial nature of the attacks in Albuquerque — and the stubborn mystery of who is responsible — is uniquely disconcerting, said Sumayyah Waheed, senior policy counsel at Muslim Advocates, a civil rights group.

“I can’t think of any incident like this,” she said in an interview before news of the suspect’s arrest.

Ms. Waheed said it was concerning that the police in Albuquerque had apparently made a possible connection between the attacks only after three Muslim men were killed.

Although Naeem Hussain’s death on Friday heightened the concerns of his community, Ehsan Shahalami, his brother-in-law, said the killing came as a shock.

“There was never any indication of him feeling threatened or being scared of anything,” Mr. Shahalami said. “On the contrary, he was very fond of Albuquerque. He wanted to give back to the place that took him in.”