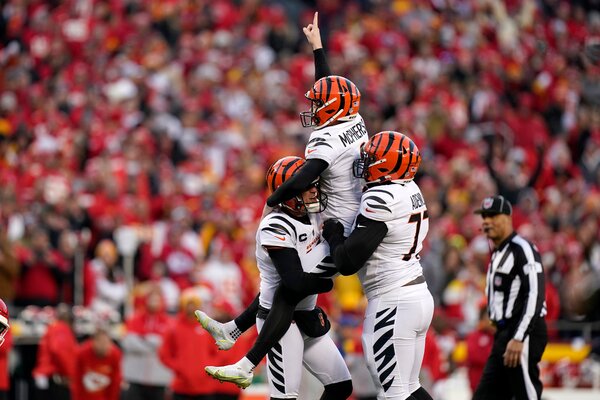 For the third time in franchise history, the Cincinnati Bengals are in the Super Bowl.

The Bengals overcame an 18-point deficit to beat Kansas City in the A.F.C. championship game, 27-24, on a walk-off field goal in overtime on Sunday.

Patrick Mahomes to Tyreek Hill is typically almost a guaranteed completion. But in overtime, the Kansas City quarterback Mahomes lofted a pass to Hill, who was covered by safety Jessie Bates III. Bates tipped the ball and it ricocheted into the hands of safety Vonn Bell.

Evan McPherson, whose trusty leg got the Bengals past the No. 1 seeded-Titans and into the A.F.C. championship game, nailed the 31-yard field goal.

The Bengals advanced behind a poised performance from their second-year quarterback, Joe Burrow, who finished with 250 yards, two touchdowns and an interception. He bested Mahomes, who despite a stellar first half, threw two interceptions down the stretch as the Bengals defense made big play after big play late in the game to send their team to the Super Bowl.

“Usually when you lose the coin flip to those guys, you’re going home,” Burrow said. “But our defense really stepped up and made plays in the second half.”

In the first, Kansas City raced to a 21-3 lead over Cincinnati thanks to the offensive prowess of Mahomes. He shredded the Bengals defense with his seemingly unrivaled throwing abilities. He extended plays with his legs and found open receivers either deep downfield or in the end zone.

It looked like Kansas City would march mercilessly past the relatively inexperienced Bengals to its third-straight Super Bowl appearance.

The game did an about face after halftime.

Cincinnati seemed to realize that if its offense couldn’t keep up with Kansas City’s scoring, it could simply keep Mahomes and the other playmakers off the field.

After giving up touchdowns on each of Kansas City’s first three possessions, the Bengals forced four Kansas City punts in the second half and turned over Mahomes in the third quarter.

The Bengals, led by Burrow and the Offensive Rookie of the Year Award winner Ja’Marr Chase, scored 14 unanswered points in the second half to take a 3-point lead near the end of regulation before Mahomes and the Kansas City offense forced overtime.