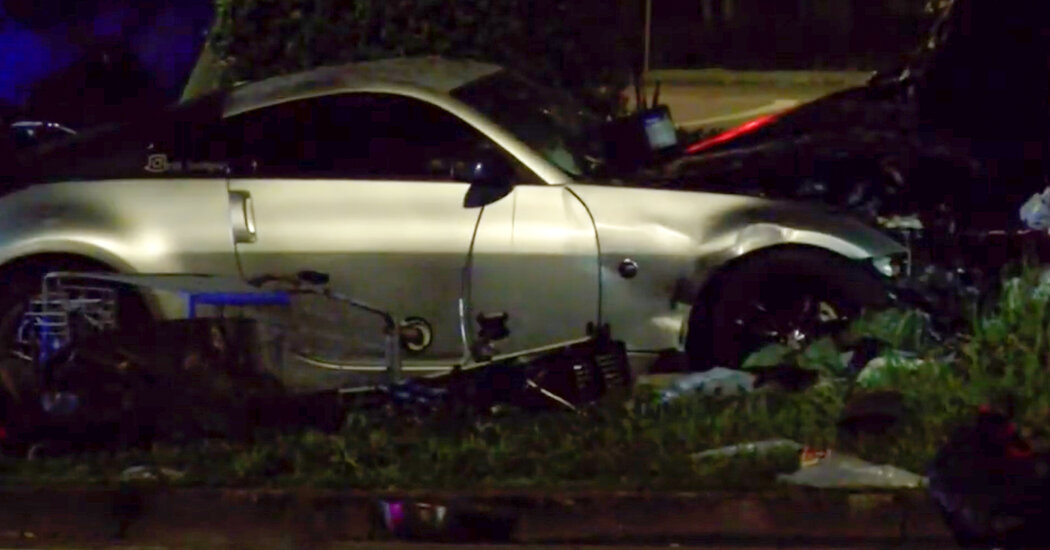 Four people were fatally injured early on Sunday morning when a driver crashed a car into an encampment of homeless people in Salem, Ore., the authorities said.

Two people who were at the encampment died at the scene, and two others died at a hospital, according to a Salem Police Department statement.

Two other people from the encampment were hospitalized with life-threatening injuries, the police said.

The driver, Enrique Rodriguez Jr., 24, was hospitalized and later arrested on four counts of first-degree manslaughter, one count each of second-degree and third-degree assault and six counts of reckless endangerment, the police said.

Mr. Rodriguez was being held in the Marion County Jail. It was not clear if he had a lawyer.

The police said that alcohol might have been a factor in the crash, which happened around 2 a.m. Mr. Rodriguez, who was the only person in the car, veered off a street and pinned two people underneath the car, which the police described as a “two-door sports coupe.”

The police did not release additional details, including the names of the victims and the driver’s condition.

Josh Lair, the chief operating officer of Be Bold Street Ministries, a nonprofit organization in Salem that helps those who are homeless, said on Sunday that he knew the victims but that he did not want to disclose details about them.

“It’s a tragedy what took place,” he said. He added: “This city, everybody will be affected by this. It’s a horrible event.”

After the crash, officers helped people who were not injured to collect their belongings, the police said in a second statement on Sunday. Three people were taken to a motel.

The city’s mayor, Chuck Bennett, said in a statement that the encampment was on State Department of Transportation property and that it was “slated for cleanup this coming Wednesday.”

The encampment, which was in the area of Front and Division Streets Northeast, was “right next to a major thoroughfare,” Mr. Bennett said, and it had been set up there about two weeks ago.

“There were tent openings virtually onto the state highway,” he said. “This was a sad event with a tragic outcome.”