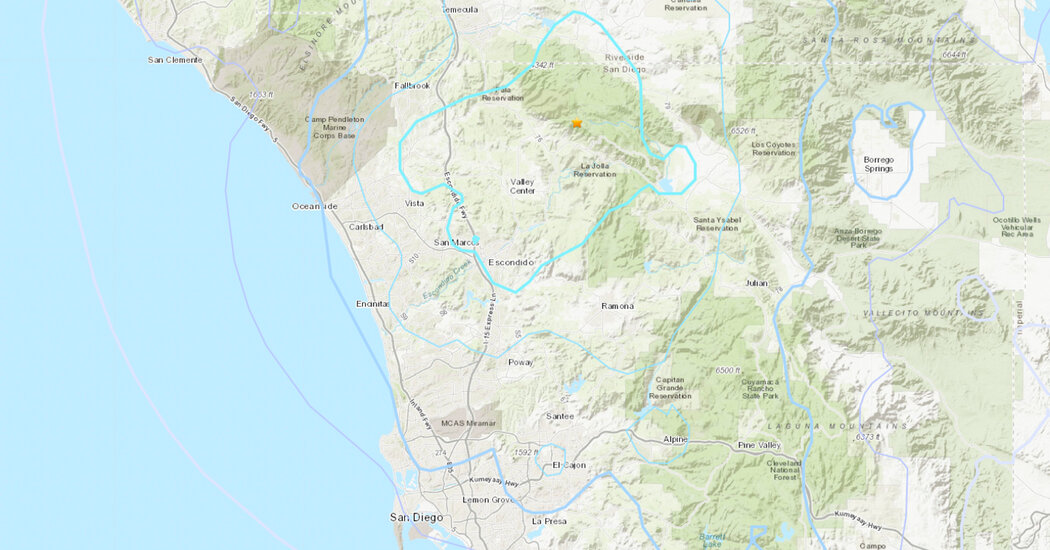 Sandra Herrera was getting dressed on Sunday morning when the ground started shaking.

She felt two big jolts and heard a low rumbling.

“I thought it could be the Big One,” said Ms. Herrera, 22, referring to the long-feared earthquake in California.

Still, the 4.1-magnitude earthquake that rattled parts of Southern California, including San Diego and Riverside Counties, was strong enough to knock a lotion bottle off her dresser, said Ms. Herrera, who lives in Menifee, a city that is about 75 miles north of San Diego.

The quake struck at 9:46 a.m. local time about three miles west of Palomar Observatory, Calif., and it was powerful enough to get people talking across Southern California. Though small earthquakes are common in the region, this one “felt more potent,” Ms. Herrera said.

Experts said that Southern Californians had no reason to worry about this earthquake.

“This is not a big deal,” said Don Blakeman, a geophysicist at the National Earthquake Information Center in Colorado, part of the U.S. Geological Survey.

There are several faults in the region that produce many small earthquakes, but a 4.1-magnitude temblor is pedestrian compared with some of the more notable quakes that have shaken the area, including the 6.7-magnitude Northridge earthquake in 1994. More than 60 people died in that natural disaster.

There were no reports of injuries or damage from the earthquake on Sunday, Mr. Blakeman said.

“It usually takes upward of a 5.0 earthquake to do damage in the U.S.,” he said.

The agency did not have an estimate for how long the earthquake had lasted, but several people reported that it had lasted 10 to 20 seconds.

There were two minor aftershocks, and there is about a 5 percent chance that a larger earthquake will follow, according to the Southern California Seismic Network.

The quake was a big moment for Carter Krengel, a 27-year-old paralegal who moved from Minnesota to California in 2018. It was his first time experiencing an earthquake.

He said he thought it was a shock wave because he lives not far from Camp Pendleton, a Marine Corps base that is the site of lots of explosions.

Mr. Krengel had been playing Mario Kart at his home in Vista, about 40 miles north of San Diego, when he heard something that sounded like a car crash, he said.

“Then I felt a distant rumble and the house shook,” he said.

He did not realize there had been an earthquake until he checked Twitter, where residents often go to see whether the rumbling they felt was just their imagination.

“I don’t want to be in a bad one, obviously, but I wanted to feel the earth shake,” he said. “And I definitely did.”